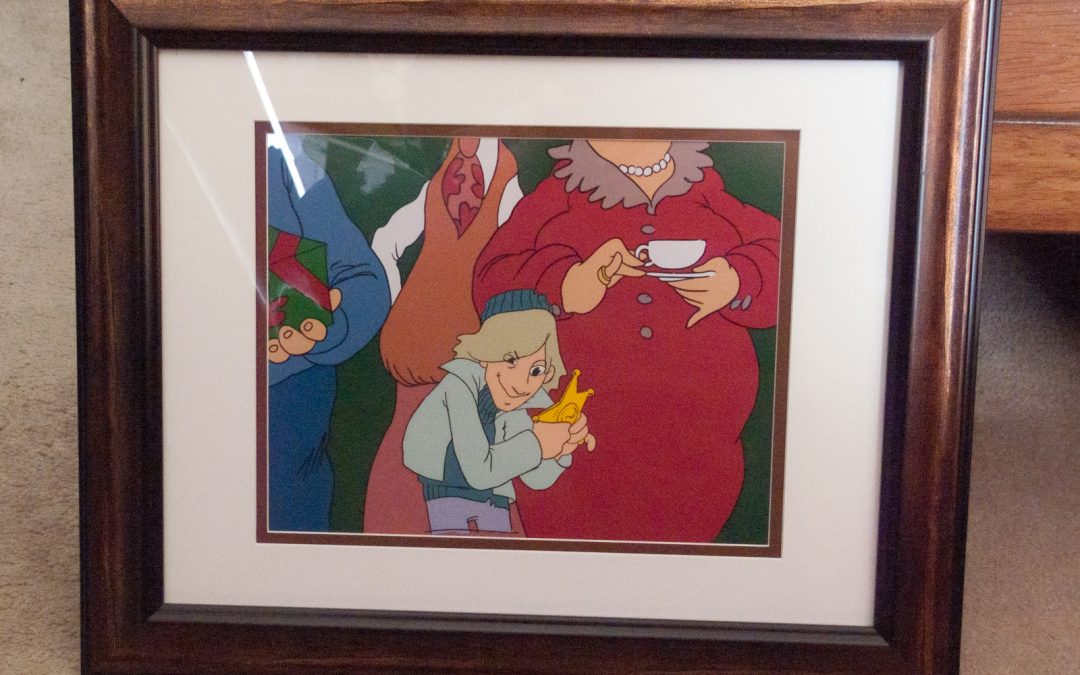 The tale of finding and prepping a Cosmic Christmas animation cel for display.

I’ve always loved A Cosmic Christmas, for many reasons. I remember it when it aired for the very first time and still watch it regularly. And I collect all kinds of stuff from it if I can, LPs, books, video cassettes… everything but DVD, because they’ve still yet to put it out! (Fingers crossed for BluRay). But a couple of years ago, when I was doing my semi-regular ebay search for Cosmic Christmas paraphernalia, I came across a batch of original cels (or they say they’re original, they sure look real. No one tell me if they’re not). There were no key scenes and they’d paired the painted cels with random backgrounds from other shows, so it wasn’t ideal, but I knew I could work with it, so I bought it.

So, where to begin. Here’s what I got. It was the best of several cels on offer. At least I knew the character and the scene. No idea what the background’s from, but it didn’t matter.

First I checked that it was a cel that was actually used, so I scrubbed through the video and found the exact frame it was used.

Just for fun I overlaid the cell on a screenshot of the special, to see what I was working with.

As luck would have it, one of the other cels they were offering online had the correct background, but the wrong cel. Didn’t matter, it gave me a clearer sense of the original colour from the shooting.

I suppose if money weren’t a factor, I could have just bought the other cel and used it’s background, but they were just colour photocopies, so nothing particularly special about the background, but it did give me something to use as a better background. Since it was animation, I thought it best to redraw it in Adobe Illustrator, so the lines would be crisp and clean. So that’s what I did.

I had to guess a bit on the background colour since the video was old and dark, but I’m pleased with how it turned out. Now all that was left was to drop the cel on top and frame it!

And that’s it. It hangs in my hallway and I’m always proud to show it off. A nice little memento from one of my all-time favourite Christmas specials!

Oh, and there’s a certificate of authenticity. Again, no one correct me if it’s fake, I just don’t want to know.

Cutouts: The Grinch, Max and Grinchlets